By far the best way to screw up your conversion rates is to go mainstream. 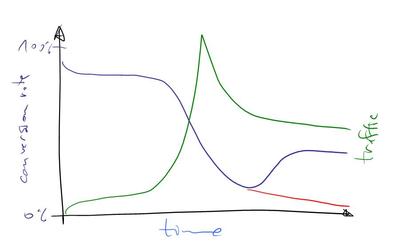 The traffic graph is the number of visitors per day while the conversion rate is the percentage of the visitors converted. When you go mainstream your traffic will spike and plateau at a lower level a few days later. This will screw up your conversion rate. Don’t worry though – figure out who the visitors are and fix your landing pages to target them as good as you can.

If you don’t belive me think about the what the Twitter homepage looked like in time. The first one I saw had the public stream on it – geeky as hell. They changed that into a still somewhat geeky homepage that explained what Twitter is and helped you register. The latest one is almost non-geeky and focuses on real-time search and has a prominent sign up button.