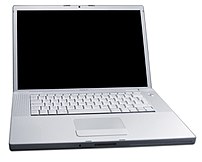 Image via WikipediaI’m at the conference and going to conferences without a Mac is obviously a weird thing to do – everybody else has one. The irony being that I’m sitting in the Microsoft lounge and there’s a bunch of people sitting on Microsoft Expression and Silverlight beanbags using Apple computers.

The first thing to disappoint me was that they got my name wrong. I know I have a “weird” (non Latin1) letter in my surname but I thought that Unicode / UTF-8 managed to spread enough for it not to be a problem. Currently my name is “Mrdjenovi_” – yey.

The next thing was that we only got an Adobe plastic bag with a brochure of what’s going on in it. If we got a real bag with a bunch of stuff most of us would have to carry two bags around. But then again the invitation did say that we only need to bring ourselves. If I came with nothing on me I’d be pretty screwed.

Fortunately I found the cloak room and an O’Reilly stand. I left my coat and I now own Ambient Findability.